Mas des Dames translates as Farm of Ladies. It was christened by current owner Lidewij van Wilgen of Holland upon learning that her three young daughters were the third generation of daughters to be raised on the Mas in recent memory (the farm dates from 1750). Lidewij—Lee to us—abandoned a world of advertising in Amsterdam in favor of the French countryside in 2002. It was an idyllic dream, one she put into play.

The criteria were simple: a small farm with vineyards in walking distance. She found Mas des Dames tucked back on a flank of a hill outside of Murviel-lès-Béziers. Murviel is a forgotten medieval village with narrow, circular streets spreading concentrically outward, and it sits on a point of high ground in the hinterland behind the ancient Mediterranean city of Béziers. The Mas was perfect, and altogether traditional with small vineyard plots planted on contours. 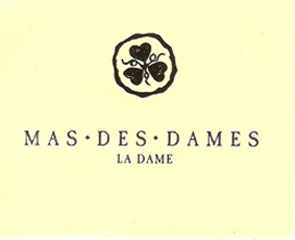 http://www.vintage59.com/portfolio/france/languedoc/mas_des_dames.php
Available in: Maine
Grown: France
Languedoc
The Languedoc wine region of France is located on the border of the Mediterranean Sea, between the Rhône delta and Spain. The Languedoc region produces mostly red wines, a large portion of which is "Vin de Table" and "Vin de Pays". Languedoc wines are everyday drinking wines. Vineyards in the Languedoc are generally planted along the coastal plains of the Mediterranean. The peak growing season (between May and August) is very dry and the majority of its rainfall occurs during the winter. The main grapes found throughout the Languedoc wine region are Carignan, Syrah, Grenache, Mourvèdre, Cinsaut (red); Maccabéo, Grenache Blanc, Bourboulenc, Picpoul, Clairette (white).